As a starting activity for an Of Mice and Men revision class, we looked at the significance of names in Steinbeck’s novel. There is a theory that names in literature have been chosen by the author for a specific effect, and we definitely found this to be true! Here is what we came up with as a class: 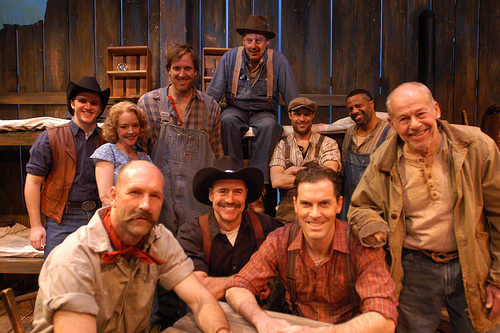 Significant as she is not given a name (just like Candy’s dog). This implies her lack of power, which can only be given in association with her husband. It also implies that nobody likes her as they don’t bother to ask her name. Her real name could have been left behind with the dream. The possessive apostrophe implies that she is simply Curley’s property which links to a woman’s place in 1930s.

This is ironice as he is the largest character in the book. However, is is portrayed as mentally ‘small’ and childlike. His name Lennie, a derivation of Leonard, means lion – alluding to to his physical strength and power over others.

Is sweet and friendly to George and Lennie as the enter the bunkhouse. He is the key to the success of the dream – giving them a ‘sweet treat’. However, Candy is also bad for you, this can relate as he makes G and L believe in their dream, which never comes true.

Named because of his crooked back, a derogatory term linked with his status on the farm as a black man. Like Curley’s Wife, he isn’t given a name. He does seem like a character who is difficult to get on with which also links. Crooks also has a negative connotation of criminality, showing a form of prejudice.

His name implies that he is twisted and not straight forward. Like his curley hair, he is tightly wound up and ready to ‘spring into action’. It is a nickname, which implies a lack of respect from the others. It could also be seen as slightly mocking.

6 thoughts on “Of Mice and Men: Nominative Determination”