With all of the current hoo-ha about the negative influence of slang use and the so-called deterioration of Standard English, it’s a perfect chance to look at how language has always evolved and changed. The English language in its early form is barely recognisable to us today. Check out this extract from Beowulf – an Old English classic:

Can you recognise any words? The text is 900 years old, and English has developed a lot since then. The language was originally Germanic , but Norman invasions brought a French influence which slowly evolved into something a little more recognisable in the Middle Ages. Here’s a snippet from the poster boy of the era, Chaucer:

There were no standardised language rules, and language was varied between people and contexts. The printing revolution and the advent of mass production helped to solidify the rules of English language so that by Shakespeare’s time, we had the dawn of Early Modern English.

Shakespeare is held in high esteem by the educational system, and it is mandatory that students in England study a selection of his plays during their time at school. However, don’t let his lofty reputation deceive you – he was a renegade of his time and a master of language. His plays contained many words and phrases which had never been heard before but, through his popularity, have now become a solid part of what we consider to be Standard English. Here are some common phrases that he coined:

Shakespeare certainly wasn’t the only one to influence language, but his influence is arguably the greatest of all of his contemporaries. So here’s your perfect counterargument the next time someone like Linday John’s claims that you sound like you’ve had a ‘frontal lobotomy’ when you use slang – if Shakespeare could invent words, then so can I! New language is exciting, creative and indicative of context. The Oxford English Dictionary added these words to their dictionary recently: 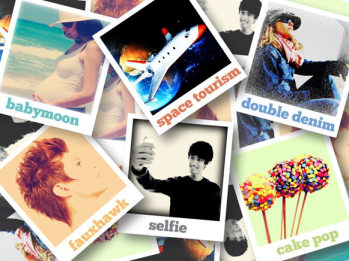 If our nation’s greatest dictionary can include ‘selfie’, why can’t young people use words like ‘bare’ or ‘innit’ without being scorned upon. I’d argue that criticism of slang says more about those who criticise than those who speak using slang. It may be no coincidence that snobbery often lies around words which come from the MLE dialect (Multi-ethnic London English). The perception that many adults have is rather negative – are they right to feel this way?

The History of the English Language: