We began the lesson by reviewing the work done in the previous lesson and reading our last post. We noted that Radhika had set a high standard of quality for her notes taken.

We had to come up with a statement to add to the ‘About Us’ section of the blog.

We were given a comparison grid for the 15 poems in the AQA Character and Voice cluster in the literature anthology.

To start, we sat down together and compiled ideas for the last poem that we studied ‘The Ruined Maid’. Miss Ryan sat down with us to do this and we completed the 6 rows of the grid together.

Miss Ryan began by performing an effective reading of the poem to remind us of the main ideas. 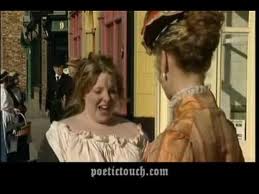 This is what we found: ‘The Ruined Maid’

Ideas and Feelings: Two women reunite after a long period of time. They both used to be poor, country women, but one (Melia) has become a prostitute.

Miss Ryan is planning a revision activity for those of us who have forgotten about poetic techniques.

Metaphor – to directly compare one thing to another.

Simile – to make a comparison using the words ‘like’ or ‘as’.

Personification – to attribute human characteristics or actions to an object.

Iambic Pentameter – a line of poetry with 10/11 syllables, 5 of which would be stressed (emphasised) when spoken aloud. It replicates natural rhythms of speech: ‘I’m going to buy a can of Fanta’ or ‘Can we have lasagne for dinner mum?’

When we combine all of our opinions, we come up with the best answer. We learn more when we listen to each other.

Miss Ryan read ‘Ozymandias’ aloud to help us remember, as we hadn’t read it for about a year. Some notes on the form in ‘Ozymandias’:

Throughout the lesson we made a note of pupil contributions. Here is the tally of the most regular contributors:

Radhika – 5 (But she shouted out twice – needs development Radhika!)

Everybody else contributed once, but they had to be targeted to give their opinions. We are looking for these students to have a more active role in contributions next lesson!

Like Ozymandias’ power and the The Ruined Maid’s morals, our time at school is coming to an end. With around 24 lessons left until the exams, we can only achieve if we engage  in what we are doing and listen to each other.