Today we did a mega revision of 5 poems in the Character and Voice cluster. We had around 10 minutes to recap the poems To give us focus, we worked on AO2:

explain how language, structure and form
contribute to writers’ presentation of ideas,
themes and settings

Stanza 1: Repetition of ‘my Brendon Gallacher’ shows fondness, there is also possessiveness in the pronoun ‘my’. There are lots of contrasts between the narrator and Brendon – Brendon coming from a poorer, less privileged background than the narrator.

Stanza 2: Continued repetition of ‘my Brendon Gallacher’, acts almost like a chorus in the poem – making it cheery and childlike. The relationship between them is explored in further detail, revealng itself to be very close, honest and secure. Scottish dialect ‘wee holiday’.

Stanza 3: The narrator makes excuses for Brendon’s absence ‘holes in his trousers’ – this could be our first sign that he is imaginary. Enjambment is used when the narrator describes Brendon, revealing their excitement about him.

Stanza 4: Bad weather at the start of the stanza sets a change in mood. Dialogue is used to show the narrator’s mother asking about Brendon with enjambment to reveal the pressure that she puts the narrator under.

Stanza 5: An abrupt change of tone ‘He died then’. We finally realise that he was a figment of her imagination.There is a sadness at the loss ‘Oh’, but some final descriptions that reveal eternal fondness ‘spiky hair’ and ‘impish grin’.

Short Sentences: ‘Some place nice’ could be seen as sinister, suggesting that where they are now is not nice. ‘Oh Brendon’ –  shows the narrator’s sorrow at the loss.

Why did the narrator imagine Brendon Gallagher? 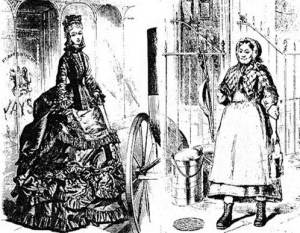 The poem is a dialogue between a simple country girl and her old friend, who has now left the country and lives as a prostitute in the city. There are six quatrains with regular rhyming couplets (AABB). The rhythm is lighthearted and playful.

In each stanza, the country girl speaks for three lines. The Ruined Maid (Melia) speaks on the last line of each stanza and constantly refers to herself as ‘ruined’.

The country girl has a simple and excitable tone; she is clearly impressed by Melia’s new status, commenting on her outfit, appearance and speech. Melia replies with a confident and slightly arrogant tone, but there is heavy irony as she is proud of something that is distasteful – being ‘ruined’. Melia’s limited speech, compared to the country girl, could reveal her limited position in life as a prostitute.

Melia loses her ‘high-class’ composure at the end when she tells the country girl ‘you ain’t ruined’. We felt that this showed that the change was only superficial, and that she is still the same person. We also felt that she was aware of the price of her ‘ruin’ and does not want the country girl to be envious of her.

Sibilance – ‘Tatters, without socks or shoes

A monologue, but almost sounds like a conversation with herself.

Structure and form – Unusual and disjointed. It starts with stage directions ‘(she looks at her photograph)’ a sense on detachment is already evident. The first 9 stanzas look similar; they contain 3 lines and the middle line is significantly larger than the others. This adds to the ‘random’ and disjointed ideas, we noticed that it was a lot more difficult to read than The Ruined Maid. There are caesuras used within lines which highlight Alison’s confusion and inability to clear her own ideas.

Mixture of pronouns and tenses – Alison refers to the past, present and future – they are all intertwined and she cannot make sense of her life. She refers to her present self using ‘I’, but when referring to past events she uses ‘she’ or ‘her” revealing a detachment from her former self.

She admires her past life ‘A bright girl she was’, ‘Like a Degas dancer’, ‘Her achievements,’ and seems to mourn in what she has lost. Loss is also seen when she considers her dead father. In lines 13-18 we see that she has to be reminded every day that he is dead ‘I, who need reminding Every morning, shall never get over what I do not remember.’ She feels jealous of her former self because she had already mourned her father.

She does have a final victory over her formal self in the last paragraph where she speaks in an almost patronising way ‘Poor clever girl!’ She then goes on to reveal the one morbid benefit of her injury: ‘I know, For all my damaged brain, something she doesn’t; I am her future.’

On a Portrait of a Deaf Man – John Betjeman

Structure – 8 quatrains where lines 2 and 4 rhyme – Elegy and a Ballad. The rhyme and rhythm give it harmony which is suitable for some of the more positive ideas, but can be strange when reading some of the more gruesome lines.

The poet is mourning his dead father, and describes his fond memories of him. Many of the memories are described to evoke the senses; taste, smells, sights. He talks about how his father dressed, what he ate and the things that they used to do together.

However, these ideas are juxtaposed against very harsh images of his father’s decaying body ‘maggots in his eyes’, ‘now his finger-bones Stick through his finger-ends’. There is an implication that he is at his father’s cemetery, feeling very bitter about his loss.

His bitterness comes to a climax in the final stanza when he reveals his lack of faith in God ‘You ask me to believe you and I only see decay’. The decay could indicate his father’s body or a decay in his faith in God. 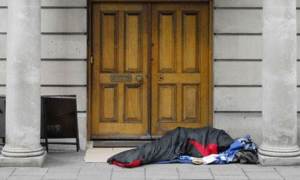 The narrator speaks directly to the reader ‘dear’, which seems as though there is a personal relationship. They then reveal that they have a strong point to make ‘To make a scene’.  The homeless person speaks in quite an educated way, which might surprise the readers and lead us to challenge our views about homelessness.

The beggar goes to to highlight their purpose – to beg for money. They list various unlikely actions ‘swallow swords, eat fire’, which highlight their desperation for money. There are biblical references to gold, frankincense and myrrh which are precious and valuable items. The beggar uses these to contrast with his simple request for coins and small change, it is quite sarcastic in tone.

The word ‘change’ is quite ambiguous and could have two meanings. It could simple mean money, or perhaps he is asking for a change in lifestyle and escape from desperation.

We thought that there was a continuation of sarcasm in the final stanza ‘You give me tea. That’s big of you’. It would be easy to think that he is ungrateful, but in fact he is desperate for more than just a cup of tea ‘I’m on my knees. I beg of you’. The sentences have become shorter; he is more direct with his request now.

Well done class for gathering such a great range of ideas.

A special thanks to Ravi for his excellent notes on this post!